The principle of non-interference in the internal affairs of other countries is a cornerstone of international law yet that principle is being flagrantly breached by Samoa in its dealings with Fiji. In a remarkable development, the Samoan Government has publicly endorsed a campaign spearheaded by the renegade Fijian military officer, Ratu Tevita Uluilakeba Mara, to overthrow the government of Fijian leader Frank Bainimarama. In doing so, it’s set the scene for an even bigger rift between the two countries with potentially serious consequences for the entire region.

Bainimarama is not only Fiji’s prime minister but the current chairman of the Melanesian Spearhead Group (MSG), which links Fiji with Papua New Guinea, Solomon Islands, Vanuatu and the Kanaks of New Caledonia. There’s already a clear fault line between the Melanesians and their Polynesian neighbours in Pacific regional forums. But now a long-standing sense of unease has turned to anger that one of the biggest and most influential Polynesian nations has seen fit to cast aside traditional notions of sovereignty and become a partisan player in Fiji’s domestic affairs.

This is the photograph that has sparked consternation about a imminent deterioration in the already strained relations between Fiji and Samoa. It shows the Samoan prime minister, Tuilaepa Sailele Malielelagaoi (right), meeting two of Frank Bainimarama’s arch enemies in an Australian hotel suite. In the centre is Tevita Mara, the son of Fiji’s founding father, the late Ratu Sir Kamisese Mara, who made a dramatic escape to Tonga last month after he fell out with Bainimarama and was charged with sedition. And on the left is Bainimarama’s former land force commander, Jone Baledrokadroka, who left for Australia four years ago after he too fell out with Bainimarama and has been conducting a concerted anti-regime campaign ever since while on a fellowship at the Australian National University.

Both these men – exiles committed to Bainimarama’s destruction -now enjoy the explicit encouragement of an influential, mainstream Pacific leader. In a weekend statement, Tevita Mara said the Samoan prime minister had given his support to the pro-democracy movement and a ten-point plan for elections in Fiji as soon as possible, as opposed to Bainimarama’s election timetable of 2014. “I welcome his support and this meeting was part of the process of isolating the Bainimarama regime internationally, regionally and locally within Fiji”, Mara said.

For his part, Tuilaepe confirmed his endorsement of Mara’s campaign in an interview with Radio Australia: “I tend to look at the defection and the pro-active role he (Mara) is playing now as part of the process of a solution initiated by the Fijians themselves, and in this situation, it’s so important because here is a person who was a former colleague of Bainimarama who has seen the light and decided to leave and is now taking the leading role in promoting democracy”.

The Samoan leader also called for tougher sanctions on Fiji aimed at provoking a popular uprising. “The sanctions are not enough to shake the people, to realise that the kind of government that is ruling their lives is not the right one. There should be additional sanctions. Once the people realise that the sanctions are making their lives difficult, then it will motivate them to take the necessary action”, he said.

Tuilaepa went on to criticise the influential Australian think-tank, The Lowy Institute, for suggesting that Canberra alter its current hard-line stance and reengage with Fiji. And he launched an extraordinary attack on the Bainimarama government’s domestic policies. “It is causing havoc, the treasury is empty and the government is extending its illegal activities into the use of (the) National Provident Fund” – a clear inference that Bainimarama is raiding the superannuation savings of ordinary Fijians to finance his regime.

All this means that Fiji is on a collision course with its two closest Polynesian neighbours. Already furious with Tonga for sending one of its patrol boats to “rescue” Mara from within Fiji waters, the Bainimarama regime is now being provoked by Tuilaepa’s intervention. And he’s compounded the offence by inviting Mara to visit Apia next month for further consultations. This is in stark contrast to the attitude of the Solomons Government, which said Mara wasn’t welcome there because it wanted to preserve its relations with Fiji.

The fact that the Tuilaepa/Mara/Baledrokadroka meeting took place in Canberra has fueled suspicions in Fiji that Australia is the hand in the glove of this new alliance. It lifted its ban on Mara entering the country to enable him to address pro-democracy rallies in spite of accusations that he’d abused pro-democracy activists in the wake of the 2006 coup, in which he played a key role. Are Australia and New Zealand using Samoa as a stalking horse to try to bring about regime change in Fiji? Is Tevita Mara being specifically groomed as an alternative Fijian leader in waiting? The ever lively coconut radio is abuzz with speculation about what it all might mean.

For the moment, Frank Bainimarama is striking a nonchalant pose about the threat Mara presents, thumbing his nose at the chief last week by visiting his home village in the Lau group and securing an apology from Mara’s clan for his errant behaviour. Until now, he’s also dismissed Tuilaepa as “an Aussie and Kiwi stooge” whose sole achievement has been “to force Samoan motorists to drive on the other side of the road”. A Fiji Government spokesperson said Bainimarama wasn’t planning to issue a statement on his Samoan counterpart’s latest comments. But now that Tuilaepa has openly encouraged a domestic rebellion against his leadership, that nonchalance will be sorely tested.

It’s certainly regarded as “irresponsible and potentially dangerous” by Australian academic Richard Herr, adjunct professor of governance and ethics at the Fiji National University and the author of a landmark report on Fiji 18 months ago for the Australian Strategic Policy Institute.

“When Toke Talagi, the Prime Minister of Niue, urged Fijians to rise up and overthrow the regime during the Cairns Pacific Forum in 2009, it was regarded as embarrassing and inflammatory and the then Australian prime minister -now foreign minister – Kevin Rudd, sought to tone it down”, Herr told Grubsheet.

“This is potentially just as inflammatory and dangerous and yet there’s been no public response thus far from Australia that might help defuse what is certainly an irresponsible intervention by the Samoan leader”, Herr said.

There is no Samoan diplomatic representative in Suva with whom Fiji can lodge an official protest. But there’s certainly a view that when one Pacific leader chooses to call for the overthrow of another while on Australian soil, then it would be perfectly legitimate for the Fiji Government to call in Australia’s representative and formally ask if that is also Canberra’s position.

Already, Fijian and Tongan naval vessels are engaged in a tense stand-off over the ownership of Minerva Reef, a coral outcrop with rich fishing grounds that’s claimed by both countries. That dispute has been exacerbated by Tonga’s action in sending one of its patrol boats to pluck Tevita Mara from the clutches of Fijian justice. Now that he’s also being feted by the Samoans, Fiji’s relations with its near neighbours will come under even more strain.  All of a sudden, the Pacific of legend is looking anything but.

This article has subsequently appeared in The Australian, the Fiji Sun, the Samoa Observer,  and Pacific Scoop New Zealand.

The Samoan prime minister has since issued a statement that includes the following:

I would also like to take this opportunity to comment on a recent article by a certain Graham Davis that my statements on Fiji is (sic) creating a rift between Polynesians and Melanesians. I’ve also been briefed of (sic) the article’s contents. People – especially academics – read too much into this so-called Polynesian versus Melanesian thinking. Let me put it in a simple context we can all understand.

A toad and a frog were arguing on the doorstep. One argues he is much more handsome than the other. Along comes a pretty girl, looks at the pair, screams ‘AUOI!’, stomps on both of them and runs away. Moral of the story? We live in the same pond and nobody really cares about our differences.

A quaint retort, though one that chooses to ignore the central issues. The Samoan leader is establishing himself as something of a showman and eccentric, as evidenced by his comments on the glory of the country’s transsexuals. 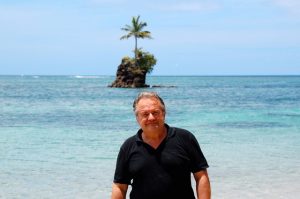