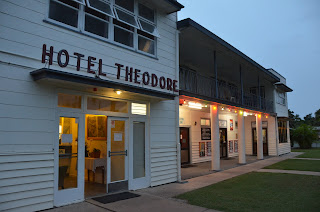 With so much loss of life from recent natural catastrophes in Japan and New Zealand, the floods and cyclone that swept north-eastern Australia at the start of the year have largely become yesterday’s news for all but those directly affected. Yet up and down the Queensland coast and hinterland, there are inspiring stories of resilience and the human capacity to endure as individual communities band together to rebuild. Prince William – destined one day to be King of Australia if the country remains a monarchy – has been warmly received during a visit to some of the worst affected areas. For our part, Grubsheet has also had the opportunity to meet flood-affected residents of the only town in Australia to have ever been completely evacuated by air – the small community of Theodore, some 500 kilometres north-west of Brisbane.

Theodore has a population of only 450 or so. But in the story of its people are some important lessons on how to survive disaster that will resonate in Christchurch and northern Honshu, all of them centred on individuals being able to rely on others. The themes are universal but it’s what Australians like to call mateship.

Theodore is at the fork of two waterways – the Dawson River and Castle Creek – whose swollen banks were breached at the end of December by a flood peak that reached a record 14.7 metres. As a sea of murky water and sludge enveloped residential areas, sometimes to roof height, a fleet of helicopters plucked Theodore’s citizens to safety in driving rain and deposited them at the adjacent mining town of Moura, 50 kilometres away. There, the Anglo-American mining company housed and fed them for three weeks before the floodwaters receded and they were allowed back to survey the damage.

The experience was traumatic for the whole community yet only now are many people being hit by an acute sense of despondency, as the extent of their loss sinks in. Tears are not far from the surface and each cloud cover and rain drop brings a renewed sense of dread. “I just can’t sleep if I hear rain on the roof”, one resident tells us. “I have terrible nightmares of the water raging around me again and being covered in mud”, says another. In some cases, the pain is exacerbated by disputes with insurance companies over the extent of flood coverage. “I’m developing a real hatred for my own insurer”, says Liz, the owner of the local bus company. “I faithfully handed over my premiums for years expecting them to come to my aid in a crisis. Now we’re at war”.

But the story of Theodore is also one of survival and inspiration and especially the capacity for ordinary people to provide extraordinary service to their fellow citizens. Theodore takes it name from a former Queensland Premier,”Red Ted” Theodore, and is one of the few small towns in Australia to have been designed by the great Canadian architect Walter Burley Griffin, who designed Canberra, the national capital. “Theodorians” – as the local people call themselves – are immensely proud of their home  and the sense of community it inspires. They continually refer to the “spirit of Theodore”, as if the place itself is imbued with the optimism and pioneering “can do” attitude of its residents. That spirit is embodied in the local doctor, Associate Professor Bruce Chater ( yes, who says rural Queensland doesn’t get top medical attention?)  who’s been a Theodore resident for 30 years.

In many ways, Bruce is the glue that holds this community together, though he insists himself that it’s the community spirit of Theodore that really binds this small population into such a potent, united front. All that spirit needed to be mustered against the elements just after Christmas, when torrential rain produced flash floods that bore down on the town from the two waterways that surround it. As the floodwaters rose, Bruce took to the streets on his jet ski to do his rounds. And as the crisis worsened, he was part of the small team of prominent residents who marshalled the population into action. Cut off on all sides by flooded roads, the very survival of the people of Theodore was at stake as the town itself slowly drowned. An urgent air lift was the only option and so began a remarkable episode in the long history of disaster relief in Australia.

The only remaining dry land in town was a strip of roadway between the community-owned pub (pictured) and the Returned Services League clubhouse opposite. With the residents now crammed into the RSL after abandoning their flooded homes, a fleet of helicopters – private as well as military Blackhawks – began ferrying them to high ground in the adjacent mining town of Moura. The home video pictures of this evacuation on December 28th are startling, huddled groups sprinting towards the choppers in driving rain and four craft at a time gingerly taking off from an ever dwindling island in the middle of town. 351 people were moved in this way without incident in a matters of hours, a commendable feat under any circumstances but especially in such atrocious conditions. As one resident puts it – “God was smiling on Theodore that day. It was a bloody miracle”.

At the other end of the journey, the residents found a welcome that reduced many to tears of relief and gratitude. The timing of the disaster was fortunate in one sense in that the Anglo-American mine at Moura was in Christmas shutdown and the staff quarters were largely vacant. Without hesitation, the mine management agreed to a request from Bruce Chater and the other community leaders to help house the evacuees. They also organised such necessities as items of clothing that the residents of Theodore had been obliged to leave behind. For three weeks, the mine housed and fed the evacuees before the floodwaters subsided and they were able to return to their homes. Even now, some Theodore residents break down when they recount the many kindnesses extended to them during their stay in Moura, a town with an equally fierce sense of community and a history of acute rivalry with Theodore, especially on the rugby field. “When we needed them, they were there for us”, says Vaughn Becker, a local Banana Shire councillor, the tears welling in his eyes. “It was the epitome of the Aussie spirit of mateship and we’ll never forget it”.

The random acts of kindness continued when Theodore residents returned home to begin the heartbreaking task of assessing their losses and rebuilding. Sharyn, who owns the local bakery and cafe, tells a typical story. ” I was just standing in the shop overwhelmed by everything, the mud, the water, everything. Suddenly a complete stranger appeared at the door and said ‘I think you need some help’ and immediately set to work removing the debris and cleaning up. This bloke stayed for three days. I only ever knew him as Barry the boilermaker from Biloela (a nearby town). But bless him. I’ll never forget what he did for me”.

It’s this spirit that continues to be celebrated in Theodore as the town slowly recovers. It can’t be prescribed, legislated for or enforced. It comes from the heart of people of goodwill. It is the essence of human kindness. And we can only hope that the same spirit prevails in the areas of devastation in northern Japan that fill our screens now, far from Theodore and the equally unforgiving Australian bush.