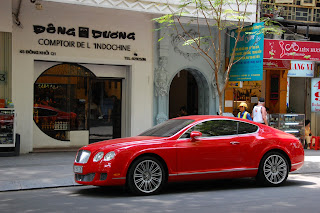 Grubsheet is in Indochina this week, marvelling at the breathtaking transformation of the city the locals still refer to as Saigon, 36 years after their communist masters insisted on changing its name to Ho Chi Minh City in honour of the wispy-bearded architect of their revolution. The French colonisers who Uncle Ho deposed before his lieutenants deposed Uncle Sam two decades later used to call Saigon the Pearl of the Orient. It still is and holy pho, what a monster strand the city’s elite wears around its collective neck nowadays.

By far the biggest obvious change since we last visited three years ago is an explosion in the trappings of wealth of Vietnam’s movers and shakers. The accompanying photo pretty much says it all. Long gone are the bicycles, black pyjamas and conical straw hats or the later Vespas and Levis. This is now communism with the imposing front grill of a Bentley, clad in Armani or Chanel and shod with Jimmy Choo. All of which amounts to a pseudo-capitalist nirvana for an unelected clique still masquerading as “socialists” who preside over a one party dictatorship in which their fellow citizens never get a chance to remove them because they don’t get a vote. Funny how all totalitarian countries wind up the same.

The upside is that the Vietnamese people are still charming and the food sublime. Just pity the platoons of beggars on Saigon’s streets for whom communism is no different from capitalism. They still have to kow-tow to those at the top while only ever being able to dream of making the party connections that are the only route to success. Ironies abound. But to think that this ostentatious decadence was precisely what the legions in black pyjamas were intent on destroying when they swept into Saigon in April 1975. Was this really what Uncle Ho had in mind?

The morning paper brings a delightful start to the week. A local woman with a face as pitted as a pineapple has just turned 121. Like all good journos, the Vietnam News reporter asks her the key to such a long life. It’s eating only fish and never telling a lie, she says. Nothing about political longevity, of course,  but Julia Gillard would do well to take note.