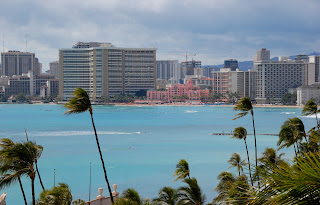 At 800 kilometers an hour – as fast as a commercial jetliner – the giant tsunami triggered by the biggest earthquake ever to hit Japan rolls across the Pacific towards the far reaches of South America, prompting mass evacuations and mass consternation, if not panic. The land masses and tiny atolls in its path can only brace for the worst and hope for the best, grateful for the huge investment made in tsunami warning systems after previous disasters.

The American-operated Pacific Tsunami Warning Center in Hawaii has a network of wave height monitoring gauges at key points across the world’s biggest ocean. As preliminary results come in, the variations are dramatic, lower readings in some of the more vulnerable places, much higher ones in others, like the 2.2 metre ( 6.6 feet) surge recorded in Crescent City, California, the scene of a previous tsunami tragedy. As with everything else in this crisis, nature’s display of wrath and unpredictability is awesome.

Grubsheet has a particular interest in our old hometown, Honolulu, where the latest surge was .71 metres (2.3 feet), enough to swamp the beach at Waikiki (in our picture) and spill over the sea wall but stopping short of the hotel belt that constitutes one of the most valuable stretches of real estate in the world. Throughout the night, Oahu’s piercing tsunami warning sirens sounded at hourly intervals while residents headed for evacuation centres or higher ground. In another of our old hometowns – Lautoka, Fiji – the PTWC gauge registered a surge of .33 metres (1.1 feet), not enough for a formal warning. So much of the region has been spared even a fraction of the appalling fate of the residents in the immediate path of the tsunamis in northern Japan. Unfortunately, any sense of relief will be short-lived as the flow-on effects from this disaster swamp the region and, indeed, the world.

Japan’s economic domination of the Asia Pacific region may have been on the wane in recent years with a domestic slow-down and the rise of China and South Korea. But the body blow to Japanese infrastructure and confidence from this disaster will trigger a second economic tsunami throughout the region with just as much unpredictability as the physical one. Global markets fell as the extent of the disaster unfolded, traders – like everyone else – transfixed by the apocalyptic scenes on live television of whole towns swept away, burning oil refineries and a panic-stricken Japanese populace. It used to be said that when America sneezes, the whole world catches a cold. The Japanese contagion in our own region will be severe.

Confidence will also be shaken by the dire prediction that this wasn’t the “big one” seismologists have long expected in Japan. Well, if this wasn’t the “big one”, what other horror awaits?  We’d all been shaken by the disaster in Christchurch but the Japanese quake was a staggering 8000 times stronger. The notion of what might happen if the “big one” were to hit further south, around Tokyo, is too horrific to contemplate.  What’s causing the “Pacific Ring of Fire ” to erupt so violently? What else is in store? It’s the stuff of nightmares.

News of evacuations around one of the Japanese nuclear power stations after its cooling system failed can only add to the doomsday gloom. What happens below ground has, of course, nothing to do with global warming. But it has huge potential to throttle wider adoption of the one viable technology the world has right now to generate power without the carbon emissions being blamed for that warming in many quarters. If nuclear power isn’t safe not because of technology but “terra infirma”, then the case for adopting it is naturally weaker. It’ll be a sobering irony for everyone if the place where the nuclear weapon was first used becomes the burial ground for nuclear power.

Leave a Reply to Ring of Fire Cancel reply