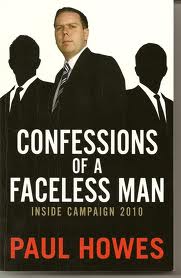 Paul Howes is one of the self-confessed faceless men who made Julia Gillard Prime Minister yet is now doing everything he can to unmake her with a crude attack on mining giant Rio Tinto that has astonished much of the labour movement. In a fiery speech to his members, the 29-year old national secretary of the Australian Workers’ Union declared “war” on Rio, insisted that monkeys could do a better job than its executives and accused the firm of “trying to rip off” its workers.

Seems those workers don’t mind being ripped off by monkeys, with the disclosure that unskilled labourers at Rio mines in the Pilbara of Western Australia take home $100,000 a year and tradesmen nearly double that. So what was Paul Howes on about? Simple. The AWU is bleeding members in the Pilbara, just as the union movement all over Australia is shrinking as ordinary workers discover that they don’t need careerist union bosses like Howes stomping all over their lucrative individual contracts.

This guy hasn’t done a day’s work in his life outside the union movement yet apparently makes no secret of using it as a springboard into a safe Labor seat in national politics.The scary thing is that he’ll undoubtedly succeed because a host of senior politicians from Treasurer Wayne Swan down owe their positions to the right-leaning AWU and its thuggish Queensland enforcer Bill Ludwig. Swan is the second most senior figure in the Australian Government yet pointedly refused to condemn Paul Howes’s vicious assault on one of the geese laying the golden eggs that Swan himself continually boasts have made Australia the envy of the world. Why? Because Ludwig made him and Ludwig can break him. Just like he and his baby-faced protege Howes broke former Prime Minister Kevin Rudd and replaced him with Julia Gillard in their gruesome palace coup last year. Who can forget Howes’s smug appearance on national television afterwards, revelling in the naked power of unelected union officials to alter the country’s leadership, with no reference whatsoever to the voting public.

Labor has bred a monster brat and Julia Gillard knows it. Unlike Wayne Swan, she comes from the left of the party but ever the pragmatist, knows that lining up “wiv the workers” in a good old fashioned bout of class warfare is the cheapest ticket to certain electoral oblivion when Australia – as old “Supermac” Harold MacMillan used to say about Britain – never had it so good. So no surprise that Gillard came out swinging,  publicly defending the monkeys at Rio and “urging everyone to have a Bex and a good lie down”.

Sure as hell, Howes has given Labor a mighty headache, not just with big business but an increasing disenchanted electorate. The Government is already languishing in the polls as voters grapple with the “Real Julia” and a creeping realisation that the flame-haired temptress may not stand for anything much beyond her own career. That is now under direct threat from the likes of Paul Howes. He and the other ARU bully boys probably won’t be silly enough to replace her with their new preferred pin-up, Bill Shorten, before the next election. But the days when ordinary Australians cheer as big business is pummelled by union heavies are long gone and Labor’s hard heads know Howes’s intemperate outburst will cost it votes .

It was former trades union boss Bob Hawke who changed the game forever when he was elected Prime Minister back in 1983. The electorate is sometimes said to have a short memory but perhaps the real problem with Paul Howes is that he genuinely can’t remember the revolution Hawke wrought of bosses and workers joining hands to strive for a better economy for everyone. After all, young Paul was only two. He was in nappies then and, alas, seems no closer to being toilet trained now.

article by: Graham Davis for Grubstreet