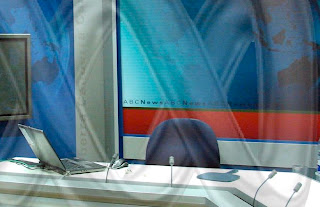 The global ABC “how to do it” guide to round-the-clock news coverage has it that when a big story breaks on multiple fronts like the Japanese earthquake, tsunami and nuclear crisis, you stick with it come what may. You drop everything and devote all your resources to covering what you can. You should also provide regular updates and recaps for those just tuning in. After all, that’s what a 24-hour exclusive news channel is meant to be, a place to get the very latest on demand.So what happened at ABC News 24, the dedicated news channel Australians pay to provide such a service? It’s a question being asked across the Australian media after a woeful performance by our national broadcaster that goes to the heart of its integrity and credibility.

ABC News 24 started out on Friday evening, like everyone else, carrying live vision from the Japanese public broadcaster, NHK. These were extraordinary pictures from the air showing the tsunami swamping coastal areas, burning refineries and general devastation. In a Tweet, ABC Managing Director Mark Scott has said the ABC couldn’t show more because it didn’t have streaming rights to the NHK feed. It was evidently obliged to source material from elsewhere and turned to the BBC, which was mounting its own live coverage, freely available to its global audience on the Net. Then for some reason, the ABC had the idea that they could better manage things themselves. And so began one of the most miserable viewing experiences in living memory.

This consisted of a succession of youthful, inexperienced presenters bumbling through as best they could, parroting the same script lines again and again. Yes, we’d already known for hours that “Japan has been hit by the biggest earthquake in many years that triggered a deadly tsunami”. OK, tell us more. What we needed was more detail and background. What we got instead was the same headline ad infinitum from anchors so green around the gills that they were swamped by the scale of the story. The producers tried to improve things by wheeling in some local academic opinion. But these people knew as much as the rest of us, which watching News 24 wasn’t much. So the sum total of knowledge they brought to the proceedings was perilously close to zero.

When it dawned on the aforementioned producers that in news terms, they were on as shaky ground as the story, they again crossed to the BBC. There, the coverage was comprehensive, informative and authoritative, everything the ABC wasn’t. Yet just as the audience finally got the nourishment they were craving, the plug was pulled again. Cue yet another frightened rabbit in the headlights of the ABC studio. It was woeful but that was just Friday night. The weekend coverage was a national disgrace.

Now, as broadcast journalists ourselves, Grubsheet appreciates the challenges and pitfalls of live television. But for a 24 hour news channel to stick with normal programming on a story this big beggars belief. All weekend, an audience crying out for more information on the Japanese catastrophe – including Australian families frantic about their missing loved ones – was aghast to find a range of programs on ABC News 24 that were so totally off the wall as to resemble a Pythonesque “not the news” spoof.

The Australian’s Caroline Overington highlighted one of the miserable low points –  a debate on the national identity of Belgians and whether the Dutch language is superior to Flemish. Columnist Tim Blair over at the Daily Telegraph wondered why enraged ABC journalists didn’t storm News 24 and seize control of the station. What? And spoil their weekend?

If history is any guide, the ABC is certain to cry conspiracy about Overington and Blair. Well, they’re from News Limited aren’t they? They’re doing Rupert Murdoch’s bidding on behalf of our competitor, Sky News. It won’t work this time, fellas ( oh and Kate Torney, head of ABC News). Too many people were watching.

When News 24 was launched, Mark Scott made a virtue of the fact that the ABC was providing such an ambitious undertaking without any increase in public funding. The national broadcaster’s bean counters squirrelled a bit from here, a bit from there and ABC news staff were required to do more for less. Bad mistake. Cut corners in news and ABC News 24 is what you get – a clutch of ingenues and pimply wannabes rather than seasoned veterans oozing natural credibility and commanding audience respect.

Scott and his lieutenants sorely need to re-learn the virtue of that old adage “less is more”. Fewer hours of bland news programming and more resources devoted to ground-breaking journalism. That’s the role of a public broadcaster in the digital age, not to ape its slicker competitors and wind up looking like a monkey itself.