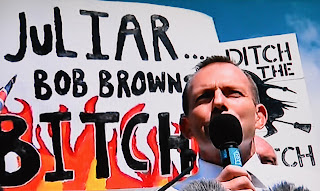 Tony Abbott is playing with electoral fire with his latest foray outside the doors of the parliament to join what the organisers described as a grassroots protest against the Government’s carbon tax but seemed more like a gathering of the looniest of Australia’s looney right. The opposition leader seems to have no compunction whatsoever to be seen publicly with the likes of the flame-haired whiner, Pauline Hanson, the deeply unattractive fusiliers of the Shooter’s Party and the shrill storm troopers of the Australian League of Rights, so far off the dial in their insistence on a white Australia that they can be more than fairly described as local neo-Nazis.

What on earth possessed the federal opposition leader to bed down with this rag tag of extremists, however much he opposes the imposition of a carbon tax without a fresh mandate from the electorate? This guy is giving small “c” conservatives like Grubsheet a bad name.

It’s inevitable – one supposes – that a so-called popular protest against an unpopular government would be hijacked by the fringe-dwelling opportunists of Australian politics. Time was when they used to be on the far left. But now it’s the extreme right that gathers under the kind of tattered anti-establishment umbrella held up by the likes of 2GB radio shock jock Chris Smith, one of the prime organisers of the Canberra protest.

By way of background, Smith is an old and friendly acquaintance from our mutual days in television at the celebrated “evil empire” of Kerry Packer’s Channel Nine. Believe it or not, his media career has been even more colourful than ours. He was suspended from Nine for forging the signature of the network’s corporate lawyer, suspended from 2GB after an “incident” involving a woman at the staff Christmas Party two years ago and at the centre of a recent furore when he organised a radio quiz around the unspeakably sad drownings of asylum seekers off Christmas Island in December. No-one doubts Smith’s sincerity but let’s face it. The guy is even madder than we are, a self confessed alcoholic and bipolar sufferer with an uncanny ability to weather the wildest of corporate HR storms and survive. You can’t help like the guy but really.

Smith openly boasted on his program of organising the fleet of buses that brought the protestors to Canberra for the carbon protest. He cast it as part of Tony Abbott’s “People’s Revolt” against Julia Gillard’s backflip on her pre-election promise that no carbon tax would be part of any government she led. At face value, this appears to be a worthy crusade against the most heinous cynicism on the part of the prime minister. But only while it isn’t hijacked by the looney right and its fellow travellers, who have the unique ability to box the famous pugilist, Tony Abbott, into the far right corner with one of their celebrated right hooks. And so it transpired in Canberra today.

Middle Australia was tonight presented with the unedifying spectacle of Abbott on the evening news against a backdrop of placards emblazoned with such gems as “Juliar – Bob Browns Bitch (sic) ” and “Ditch the Witch”, with the prime minister pictured astride a broom. What did they think? Well, not much -we’d wager -if even conservative sympathisers like Grubsheet are appalled. We expected to see the leering visages of Barnaby Joyce, Bronwyn Bishop and Sophie Mirabella on such a stage but Tony Abbott? In adoring attendance weren’t just the kind of people who give right wing politics a bad name but some characters bordering on the certifiable. The Government rightly made mincemeat of the opposition leader in the House of Representatives afterwards. You could see the glee in their eyes. If the “Mad Monk” goes on likes this, you beauty! Maybe the next election isn’t lost after all.

The most telling part of the day’s miserable proceedings was that Tony Abbott’s principal rivals in the Coalition, Malcolm Turnbull and Joe Hockey, were nowhere to be seen. They were far too smart to be caught up in a stunt by the looney right that Abbott was stupid enough to be suckered into, lock, stock and barrel. No, Turnbull and Hockey were back in their parliamentary offices sharpening their figurative knives, doubtless watching the proceedings on the lawns outside with the same glee as their Labor opponents. If he goes on this way for too much longer, Abbott will be toast. Choosing to mix with gun freaks and neo-Nazis? Maybe he’s the Mad Monk after all.