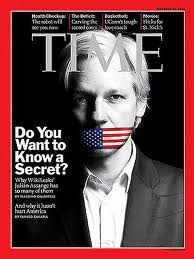 Wikileaks founder Julian Assange may well be someone totally unconcerned with personal hygiene, as some of those who’ve been in close proximity to him maintain. It’s neither here nor there for those of us keen to keep our distance from this strangely unsettling character, with his Mogadon manner and haughty self-righteousness. Yet there’s something distinctly odious about the way this convicted Melbourne computer hacker has shot to global prominence on the back of unquestionably the real “hero” of the Wikileaks saga – if there is one – the psychologically troubled American serviceman Bradley Manning.

The ABC’s Four Corners recently reminded us that Manning faces a possible 50-year jail term for downloading a quarter of a million confidential State Department cables and giving them to Wikileaks. In one of the many bizarre twists to this story, Manning pretended to be lip-syncing Lady Gaga songs during his nighttime shift at a military base in Afghanistan as he used the same CDs to stage the biggest heist of secret documents in the history of espionage. The US Government, understandably, is outraged and wants to throw the book not only at the hapless Manning but the ultimate receiver of these stolen goods, the dashing and dishy (to some deluded damsels) Jules.

Assange’s supporters regard this whole saga as a contest between good and evil. Freedom of information and the world’s right to access America’s secrets is good. Uncle Sam and his weak-kneed stooges – the Brits and the Swedes – are evil. Oh, and anyone like Julia Gillard who has the audacity to argue that the confidential internal musings of governments shouldn’t be everyone’s property, especially the enemies of the West who, incidentally, would have executed young Julian in a flash. Assange’s defenders are the usual gaggle of human rights and media types, those terminal bleeding hearts like Geoffrey Robertson and John Pilger who tour the planet accumulating air miles and ruining the ozone layer as they seek out the latest victims of “injustice” to burnish their own reputations.

Now, no-one is saying Julian Assange doesn’t deserve proper justice. But this is where things get mightily complicated. Because rather inconveniently for the whole “right to freedom of information” crusade, two comely Swedish lasses have accused Jules of the local version of rape. Evidently not exactly the kind of rape we’re used to but nonetheless rape under Swedish law. You’d imagine when the normally libertine Swedes cry rape, it’s perhaps worth investigating whether something untoward happened between the sheets. But this is where the likes of Robertson and Pilger have developed a Stockholm Syndrome all of their own, determined to keep Assange out of the clutches of the Swedish courts. Why? Because they believe the Swedes are so much under the American boot that were the British to extradite him, he’d be marched onto one of those unmarked CIA “rendition” flights before you could say Abba. This is where it all gets highly distasteful. Never mind the poor women unfortunate enough to fall under Jules’s persuasive spell ( oh, of course, they’ve been put up to it). Where’s the justice for them? No, the toast of tout Londres deserves, in the interests of our right to know, to remain in his luxurious country manor house among his new-found celebrity chums like Jemima, Bianca and that old leftist trojan Anthony Wedgwood-Benn.

Of course, Assange also has his supporters across the Atlantic, though not as many as he once had as he falls out with one-time companeros at places like the New York Times. The most prominent of these is Daniel Ellsberg, the former US military analyst who, working for the Rand Corporation, caused a national scandal in 1971 when he leaked the so-called Pentagon Papers. Ellsberg is fond of comparing Julian Assange to himself yet there’s a critical difference between these two leakers that renders such a comparison highly problematic. Ellsberg exposed serious wrongdoing by the US Government, including the revelation that the Johnson administration had continually lied to Congress and the American public about the Vietnam War. And what have the Wikileak documents revealed? Well – surprise, surprise – that the US Government has actually behaved rather well in its foreign policy dealings. State Department diplomats invariably report conversations and events faithfully and accurately, however embarrassing those otherwise private observations may be when splashed all over the world’s front pages.

The point is that the public interest component of the Wikileaks dump in exposing official wrongdoing simply isn’t there. Of course the stuff is interesting and makes headlines. But it’s still stolen property and the confidential internal communications of a democratically elected government simply doing its job. Do we insist on viewing the correspondence of our friends and workmates in the same way? Of course not. Then why do we have the right to access the correspondence of those officials 307-milion Americans have entrusted to safeguard their futures? And in turn (though I can hear the sniggers already) the future of America’s allies in the rest of the free world.

That is the big picture. The small picture, just as distasteful, is the way Wikileaks, the publisher, has left the hapless leaker, Bradley Manning, hanging out to dry. Did it consider the dire consequences he would face once it released the material? More pertinently, did anyone within Wikileaks incite Manning or conspire with him to obtain the documents? Now this is where it really gets interesting. If Manning acted alone and simply released the material to Wikileaks, it’s hard to see how a compelling legal case can be made against Julian Assange. But if he was more than just the innocent recipient, then he could be in very big trouble indeed. We don’t know what’s in the secret indictment that the American courts have prepared to try to obtain Assange’s extradition. But there was a discernible sense of alarm in the Assange camp when the US authorities tried to get Twitter to provide it with Tweets relating to the Wikileaks case.

Where this will all end, no-one can yet predict. But a superpower that can unload Hellfire missiles directed from an underground bunker in the US onto an Afghan rooftop to take out a senior Al Qaida commander can never be underestimated. If there’s evidence against Assange, the US will undoubtedly find it. And he’ll rue the day that he slung that ubiquitous satchel over his shoulder and set out from sleepy Melbourne on the path to global fame. American assurances that he won’t go to Guantanamo Bay will be cold comfort. A US federal penitentiary – which is where they intend to put him – ain’t exactly Club Med.