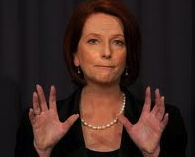 So Australia is to have a carbon tax from July 1st 2012,  despite assurances from Prime Minister Julia Gillard before the last election that such a tax would not be imposed.  The Australian electorate is used to our politicians behaving with craven self interest. But there can be few more cynical instances of a Prime Minister resorting to such a shameless about-face to remain in office. “There will be no carbon tax under a government I lead”, Gillard said categorically to an uneasy electorate about to cast its vote. Read my lips and watch my flaying hands, eh Julia? Yeah, right.

It’s one thing to promise action and not deliver it, as her predecessor, Kevin Rudd, did with his own promise of an emissions trading scheme to address what he called “the greatest moral and economic challenge of our time”. But to specifically rule out something while seeking a national mandate and then rule it in so soon afterwards isn’t a question of “semantics” – as the prime minister has so absurdly put it – but deceptive conduct.  Gillard lied to save her electoral skin before the election and has since betrayed the Australian people to protect her coalition with the Greens.

Opposition leader Tony Abbott’s prediction of a “People’s Revolt” against the tax may seem like excessive hyperbole now but when the bills eventually come in, voter anger will know no bounds. As the cost of electricity soars and households are hit with the consequent flow-on effects, Gillard will be doomed. She’s already caught between a rock and a hard place, with the Greens on the one hand demanding even tougher action and Abbott assembling his army of the disaffected on the other.

The coming months will produce bitter divisions in the country. Gillard’s clumsy, dissembling appearances on talk back radio in the wake of the announcement are just the start. Repeatedly confronting her with audio of her pre-election denials, the attack dog of the right, Alan Jones, called her “Jul-liar”. For once, the flustered prime minister had no convincing retort.

Labor strategists are counting on the Government establishing a solid stronghold in the middle, convinced that younger voters especially will reward it for doing something tangible on climate change beyond emitting a lot of hot air. But the notion that voters in marginal seats will flock to Labor as the cost of living rises shows how far the party has become disconnected from the concerns of middle Australia. Labor has thumbed its nose at the age-old dictum that Australian voters are governed primarily by their “hip pocket nerve”. It would be brave even if the cause was unassailable. But to do it when the human contribution to climate change is still so hotly contested is fraught with electoral peril.

The battlers may be confused and undecided as both sides in the climate debate put their case with equal conviction. But there’s one thing they know for certain. For Australia to tax its citizens to curb carbon emissions is the height of empty-headed folly without concerted global action, and especially on the part of the world’s biggest economies and its biggest polluters.

Some starry-eyed environmental activists might sleep more soundly at night but most people will shake their heads at the pointlessness of it all when the bills come in. Oh, sorry, there is a point. It’s for Labor to keep the Greens on side and them in office and to keep the flame-haired temptress with the forked tongue in The Lodge.

Yet this is truly a pact with the devil, as Gillard’s capitulation emboldens the Greens even further. These people are secular zealots and once appeased, will only hunger for more imposts on the community, using their vastly increased muscle when they gain control of the Senate in July. Gillard was quick to reject a statement by Greens senator Christine Milne that petrol prices would also need to rise as part of the party’s agenda. But the Greens have a gun at her head and the public knows it. Labor’s hard-heads are alarmed and with good cause. With trust in Gillard shattered, the carbon tax better not be as bad as people fear or the Abbott era is just around the corner.