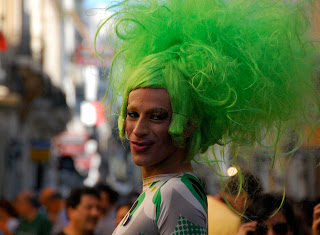 The most celebrated date on Australia’s gay and lesbian calendar, The Sydney Mardi Gras, has brought the usual collection of colourful characters onto the streets for what’s increasingly become a mainstream event. Time was when the New South Wales police behaved with outright hostility towards public expressions of gay pride. Now they have their own float in the procession and the ranks of guys and gals in blue get as big a cheer as the Dykes on Bikes, Sisters of Perpetual Indulgence or any of those other quaintly amusing subcultures that make up one of the most vigorous gay communities in the world.

The big change in the past decade or so is that straight suburban teenagers no longer go to Mardi Gras to jeer or gawk but to join the party. It’s perhaps the ultimate sign that the gay community has succeeded not only in breaking down barriers of prejudice but being accepted as part of the mainstream in Australian life, as ubiquitous as Rotary or the Country Women’s Association. Some gays we know are less than enthused that their lifestyles are now seen to be no more louche than an afternoon of tea and scones but that’s another story.

All this aside, it would be wrong to read too much into the wider community’s collective high five to gay people for the vast strides they’ve made in recent years. The theme of this year’s Mardi Gras was the campaign for same sex marriage, something quite different, we suspect, from the almost universally accepted notion now that gay people should have equal rights in every other facet of secular life. Many watching this year’s procession will have shared our discomfort about the notion of gays wanting to intrude on the one remaining bastion of exclusivity for the heterosexual majority. As it happens. some of our gay friends and acquaintances feel the same.

Now, let’s make it clear that this is not a religious argument. Grubsheet has no truck with clergy – Christian, Muslim or anything else – interfering in the lives of individuals beyond providing spiritual guidance. Indeed, we view with total distaste, bans on the ordination of women and other such nonsense justified by biblical texts that predate even the central Christian message of Jesus Christ having come to rewrite the previous script. We can also contemplate the notion of gay priests on the basis that if God’s love is for all, then it’s axiomatic that the message and sacraments can be spread by all. What makes heterosexual clergy any more worthy than gay clergy? What makes them more capable of ministering to others in a spiritual or social sense?

Where we part company with the central premise of those arguing for same sex marriage is that same sex partners clearly don’t have the same physical and social function as partners of the opposite sex. And that is the central human act of procreation. That’s right, those two forgotten people in any heterosexual relationship who make babies, nurse them through the torments of childhood and adolescence and prepare them for their roles as taxpayers to fund everything from gay neighbourhood centres to warships.  Marriage is for them, we think, not for same sex couples who want dazzling white weddings and formal expressions of total commitment before the state but don’t see it as their role to perpetuate the species for the obvious reason that they can’t. At least not in the conventional sense that doesn’t involve surrogacy, intrusive medical intervention or the use of implements originally conceived for use in the kitchen.

The two frocks wedding brigade just don’t seem to get it. Yes, they can go down the turkey baster path. Yes, they can adopt kids just like anyone else. But the formal act of state marriage ought to be for straight people, the ultimate act of differentiation if you like. Anything else is equal rights without responsibility. And that is the responsibility – overwhelmingly the burden of heterosexuals – to populate the planet or perish.  This has nothing to do with religion or politics but a deeply held conviction in much of the community that same sex marriage is simply not on, a bridge too far, a line not to be crossed.

Governments ignore this sentiment at their peril, as Julia Gillard knows, even as elements in her party try to force her into accepting a position that anyone with a calibrated political weather vane knows is unacceptable to middle Australia. Yes, the Greens leader, Bob Brown, lives in a loving homosexual union and good luck to him. We’ve been to their home and they’re a lovely couple. Yes, a good proportion of the wider community supports his view and that of his party that the time for same sex marriage has come. But a majority of Australians? Nuh. Believe otherwise and you’ll be blown out of the  election funnel quicker than a carbon emission burst.